A 10-month-old girl born at full term by cesarean section was healthy but was noted to have mild hypertonia. Over the past few months she has been increasingly irritable. Her mother reports that her urine stream can be strong and at other times is very weak. She is crawling and at times she does try to stand, but she toe walks with assistance. On examination, she has increased tone in her bilateral lower extremities with hyperreflexia and upgoing plantar reflexes bilaterally. She seems to have appropriate sensation to stimulation in both of her legs. She has no orthopedic deformities of her feet or length discrepancies in her legs. The patient undergoes magnetic resonance imaging (MRI) (Fig. 93.1). 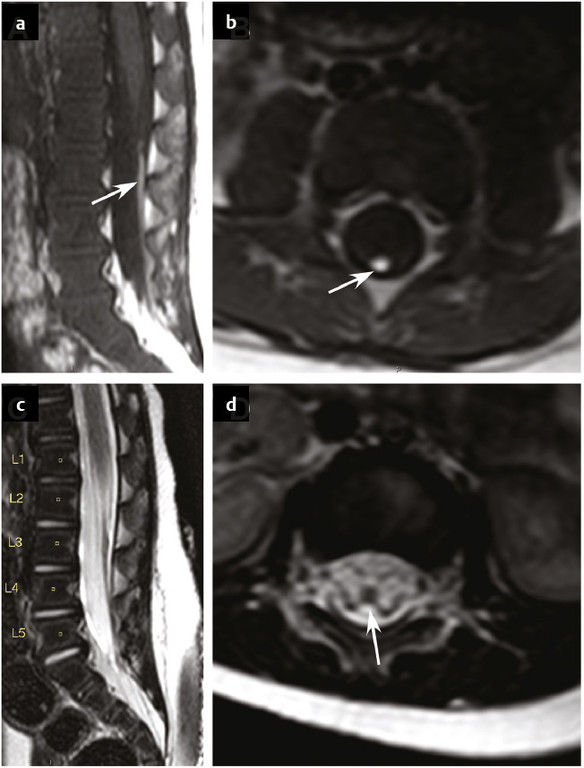 Syringomyelia represents a pathologic expansion of fluid within the spinal cord, often due to impairment of normal CSF fluid dynamics. An underlying etiology should be investigated and treated if possible as the initial management. Tethered cord syndrome is a clinical picture of spinal cord dysfunction secondary to undue tension on the cord. Most commonly, this is treated with release of the areas contributing to tension.

Syringomyelia is defined as a fluid-filled cavity within the spinal cord. Syringomyelia usually occurs between the C2 and T9 spinal levels but can extend up into the brainstem (syringobulbia) or farther down into the conus. Syringomyelia is most commonly associated with a Chiari I malformation. Other craniocervical junction conditions, such as basilar invagination, os odontoideum, and posterior fossa arachnoid cysts, have also been associated with syringomyelia. In addition, a syrinx can develop in the postinfectious, postinflammatory, and posttraumatic setting. Syrinx has also been reported after subarachnoid hemorrhage, due to both cerebral and spinal causes as well as secondary to cerebrospinal fluid (CSF) flow impairment from etiologies like disk herniations or arachnoid adhesions. Tumors (most commonly ependymomas or hemangioblastomas) are often associated with syringomyelic cavities, but these should also be distinguished from peritumoral cysts. In patients with an unclear cause for syrinx, diagnostic imaging with contrast to search for an unrecognized spinal tumor should be performed.

Tethered cord refers to an abnormal fixation of the spinal cord to either an abnormally low position in the spinal canal (usually defined below the L2 vertebra or below the L1–L2 disk space) or a fixation that causes increased mechanical tension despite a normal conus level. There are a variety of conditions that can cause spinal tethering, such as tight filum terminale, fatty filum, myelomeningocele, lipomyelomeningocele, split cord malformations, dermal sinus tracts, and lipomas.1

The pathophysiology of syrinx formation and causality are not fully understood. Currently, a popular theory is the subarachnoid space pulse-pressure theory proposed by Heiss et al.2 In this theory, obstruction occurs in the subarachnoid space, and this results in a decreased ability of the spinal canal to dampen the CSF pressure waves that are created by brain expansion during systole. This thereby increases spinal subarachnoid pressure above the site of blockage. The increased pressure then forces CSF into the spinal cord parenchyma, causing syrinx formation and enlargement.

The normal filum terminale participates in stabilizing and anchoring the distal spinal cord from undue rostral migration. This band has elastic properties that allow some movement of the spinal cord during flexion and extension of the body. Loss of elasticity due to fatty infiltration or thickening causes increased stress and tension on the conus. Whether the extra tension causes dysfunction in metabolism, decreased cord perfusion, or hypoxia is debated, but it may ultimately cause neurological impairment.

Syringomyelia symptoms can be divided into two primary categories: symptoms due to the underlying causative condition (e.g., Chiari I malformation) and symptoms directly related to the syrinx. The symptoms associated with an underlying process are not addressed here given the diverse presentations, but one should recognize that the causative condition will have signs and symptoms that should be distinguished from syrinx signs/symptoms. In addition, it is important to understand that the expansion of a syrinx cavity is often asymmetric laterally, which leads to asymmetric neurological deficits.

Syrinx is often associated with a loss of pain and temperature in a “capelike” distribution over the shoulders due to compression of the spinothalamic tract and crossing fibers in the anterior white commissure. Upon progression of a cervical syrinx, upper extremity weakness and atrophy occur due to involvement of the anterior horn cells. Next, upper motor neuron signs may develop if the syrinx extends or compresses the corticospinal tract. Patients can often present with dysesthetic pain that is presumed to result from destruction of the internuncial neurons in the intermediolateral cell columns. Additionally, anhydrosis (loss of sweating) may occur due to destruction of autonomic pathways within the columns. Depending on the size of the syrinx and pathways affected, patients may display all, some, or none of these symptoms.

The presentation of a tethered cord can be subdivided into three different clinical systems and includes the orthopedic, neurological, and urological symptoms and signs. The syndromes vary greatly with the age at presentation of the patient. Since a tethered cord is highly associated with spinal dysraphisms, patients of all ages should be examined for signs of these disorders. This includes examination of the dorsal spine for the presence of cutaneous stigmata of spinal dysraphisms (skin tags, depigmented areas of skin, dermal sinus or clefts, lipomas, nevi, hair tufts/hypertrichosis, and hemangiomas) as well as bony deficits or scoliosis of the dorsal spine. In addition to scoliosis, other orthopedic deformities that can occur with tethered cord, in particular with myelomeningoceles, include leg-length discrepancy, clubfoot, ankle or hindfoot valgus deformities (pes valgus), pes cavus, and hammertoes. There is also a propensity for hip fractures. Neurological deficits include both motor and sensory loss below the affected level and can be accompanied by radicular and/or back pain. Some patients may present with hypertonia, and in young infants the condition may be expressed as toe-walking or failure to ambulate at the appropriate milestones. In young infants and children, a regression or failure to progress in motor or urinary control should raise the suspicion of possible tethered cord. The most consistent abnormality in all ages is some degree of urological deficiency manifested by urinary incontinence or recurrent urinary tract infections. In younger infants, this is more difficult to ascertain but can be inferred by inquiring about the strength of the urinary stream. In these situations, urodynamic studies play an important role in the management, but they can be limited in young infants. Most commonly, urodynamic studies reveal detrusor hyperreflexia, although bladder dyssynergy, decreased bladder compliance, and altered sensation are similarly associated findings.3 Urological studies can be used for diagnosis as well as for a screening follow-up test. Appropriate imaging for assessment is MRI of the thoracolumbar spine, which may be performed in both the supine and the prone position to assess for motion of the spinal cord in the prone position. Axial T1-weighted images are often helpful to visualize a fatty filum. Ultrasonography may be useful in infants up to 4 months old given the ease of using this modality in this age group and the removal of sedation risks. Attention should be paid to the level of the conus, any associated pathologies contributing to the tethering, and the thickness and adipose content of the filum (although controversial, > 2 mm is considered abnormal in children4).

Treatment of syringomyelia consists of two options. The preferable approach is to treat the underlying condition that is contributing to CSF flow obstruction to allow a more physiological pressure gradient (e.g., decompression of a Chiari malformation). If this fails or is not possible, shunting of the syrinx cavity can be attempted.

The condition most commonly associated with syringomyelia is the Chiari I malformation. To treat both the Chiari I as well as the syrinx, most surgeons advocate decompressing and enlarging the area of the foramen magnum to allow for physiological CSF flow and pulsation. The second category of major etiologic factors associated with syringomyelia includes inflammation, infection, and/or trauma causing subarachnoid adhesions and therefore CSF flow obstruction. If a site of obstruction is found on diagnostic MRI or CT myelography, these sites should be explored and decompressed and/or a lysis of adhesions performed.

Shunting of syringomyelic cavities has been accomplished but has not had sustained long-term results. A syrinx may be shunted into the spinal subarachnoid space, the subarachnoid cistern of the posterior fossa, or the peritoneal/pleural cavities. In cases where decompression and/or lysis of subarachnoid blockages fail to work, syrinx shunting may be a valid and useful technique to prevent progressive neurological deterioration.

Surgical treatment of tethered cord is dependent on the initial pathology causing the tethering. Most commonly, patients with myelomeningoceles will need to have their deficit closed at birth and often require ventricular shunting due to the associated hydrocephalus. Due to periods of rapid growth, these patients can develop retethering in the periadolescent (5–10 years of age) and adult portions of their lives. Patients will often present with deficits in neurological, orthopedic, or urological function. In these patients, it is important to asses that ventricular shunting is working appropriately prior to a diagnosis of retethering because shunt malfunction can often present with similar signs and symptoms to tethered cord. The risks and benefits of surgery should be carefully balanced; repeat detethering of lipomyelomeningoceles carries an increasing risk of neurological compromise. A relatively new procedure in the management of patients with recurrent complex tethered cord (typically patients with myelomeningocele) involves a spinal shortening osteotomy and fusion to release the tension on the cord.

Timing of, and indications for, detethering of fatty or thickened filums are controversial. Overall, this operation is safe and has minimal risks with very small rates of morbidity and < 1% risk of neurological injury.5 Symptomatic patients with radiographic evidence of a tethered cord, such as a low-lying conus, a fatty filum, and a thickened filum, should be treated. Decision making becomes more difficult in symptomatic patients who have a normal-level conus, or asymptomatic patients with radiographic evidence suspicious for tethering. Intraoperative neuroelectro-physiological monitoring can be helpful during the procedure for determination of the filum terminale. The filum is identified by its dorsal and midline location as well as its slightly bluish discoloration (this is even more apparent if a significant fatty infiltrate is present). Prior to sectioning the filum, all nerve roots (dorsal, medial/lateral, and especially ventral to the filum) are dissected off. Intraoperative stimulation is performed to assess for functioning neural structures in the filum, and then the filum is coagulated and sectioned in the absence of neural stimulation. Care is taken to coagulate proximally, because after sectioning of the filum, the conus often retracts and any bleeding is difficult to control.

Both syringomyelia and tethered cord are syndromes associated with other conditions. Initial treatment should focus on addressing the underlying condition.

The presentation of a syrinx is variable and includes loss of pain and temperature in a capelike distribution due to destruction of the spinothalamic tract and decussating fibers in the anterior white commissure, lower and upper motor neuron findings due to involvement of anterior horn cells as well as the corticospinal tract, dysesthetic pain, and autonomic abnormalities due to intermediolateral cell column destruction. Patients may present with all, some, or none of these symptoms.

Tethered cord has a variable clinical presentation that includes symptoms and signs related to the neurological, orthopedic, and urological systems.

A neurosurgically focused update on the tethered cord syndrome.

Excellent review on the pathophysiology of syringomyelia, and authority on subject matter.

Reviews the urological findings in 20 children with tethered cord.

The authors report that filum terminales > 2 mm in diameter are abnormally thick, based on a review of 31 patients.

Excellent review of the tethered cord syndrome in children.