Procedure: Exposure of the Sciatic Nerve

The sciatic nerve is the largest nerve in the human body. It originates from the L4–S3 nerve roots, exits the pelvis through the sciatic notch covered by the piriformis and gluteus maximus muscles, and courses between the hamstring muscles of the posterior thigh.

A 59-year-old man presents to the emergency department with acute onset of impaired speech and right-sided weakness. He has a history of hypertension and hyperlipidemia.

A 59-year-old man presents to the emergency department with acute onset of impaired speech and right-sided weakness. He has a history of hypertension and hyperlipidemia. He became unresponsive upon arrival and head computed tomography (CT) showed hyperattenuation of the left middle carotid artery and infarction of the left hemisphere (Fig. 134.1) 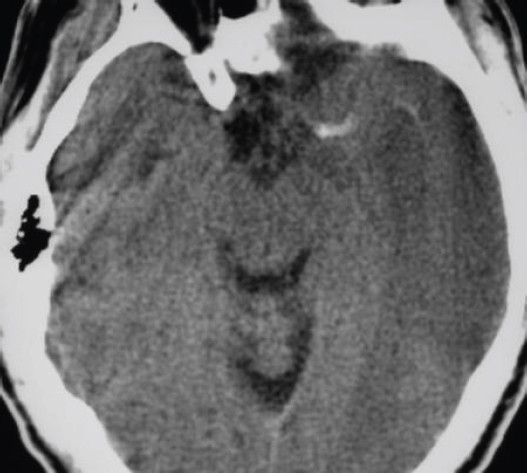 In the United States, incidences based on emergency department visits for carbon monoxide poisoning, suffocation, and drowning are estimated to be 40,000, 83,000, and 5,600, respectively, per year. Approximately 795,000 people in the United States suffer from stroke every year, with 87% of these being ischemic strokes. Incidence of stroke is nearly twice as high for African Americans as it is for Caucasians, whereas Hispanic stroke rates fall in between. Risk of stroke also increases with age but can occur in any age group. In 2013, the incidence of cardiac arrest was estimated to be 359,400 outside the hospital and 209,000 in-hospital in the United States.

Anoxic brain injury occurs when there is insufficient oxygen supply to the brain. Without oxygen, cells in the brain are unable to undergo cellular respiration, and deaths of neurons occur after approximately 4 minutes, resulting in permanent brain damage. Common causes of anoxic brain injury include carbon monoxide poisoning, drowning, suffocation, cardiac arrest, stroke, improper drug use, and electric shock. If untreated, anoxic brain injury can progress to a vegetative state, coma, and brain death, which is the permanent absence of cerebral and brainstem functions.

Anoxic brain injury can present with a variety of symptoms, depending on the cause and severity including headache, nausea, confusion, lack of coordination, decreased reflexes to stimuli, loss of cranial nerve function, seizures, syncope, and coma.

The mechanism of injury is an important factor when determining the prognosis for a patient suffering from anoxic brain injury. Patients who score 4 or less on the Glasgow Coma Scale (GCS) (Table 134.1) within the first 48 hours of their injury have increased mortality.1 In addition, the lack of corneal or pupillary light reflexes at 24 hours and the lack of any motor responses at 72 hours are associated with an increased likelihood of neurological disability and death.

CT is used to assess the degree of brain injury and locations of ischemia and/or hemorrhage in patients with potential anoxic brain injury. Early signs of infarction on CT scan include hypoattenuation of the brain supplied by the middle cerebral artery (MCA), hyperattenuation of large vessels, cortical sulcal effacement, loss of the insular ribbon, and loss of gray–white matter differentiation. In a series of 15 studies, signs of infarction were found in 61% of patients with symptoms of ischemic stroke. The presence of any of these signs was associated with significantly increased risk of adverse outcomes.2

The Alberta Stroke Program Early CT Score (ASPECTS) is used to determine prognosis in patients with ischemic stroke. The MCA territory is divided into 10 regions, and a score from 10 (normal CT) to 0 (ischemia throughout the MCA territory) is given based on the number of regions that are preserved. The initial study found ASPECTS to be a strong predictor of functional outcome in patients with ischemic stroke who were treated with tissue plasminogen activator (tPA), with excellent interobserver reliability. A value = 7 was associated with increased mortality at three months.3

Treatment of acute anoxic brain injury largely depends on the specific cause. The main goal is stabilization of the airway to secure the oxygen supply, maintenance of blood pressure to enable oxygen delivery to the brain, and managing intracranial pressure, which could increase from cerebral edema.

Carbon monoxide poisoning is generally treated with 100% normobaric oxygen therapy. Hyperbaric oxygen (HBO) therapy is used in severe cases, with intubation for patients with impaired mental status. HBO has been shown to be generally well tolerated and beneficial in preventing delayed neurocognitive deficits in patients with severe carbon monoxide poisoning. Contraindications to HBO include pneumothorax and obstructive lung disease.

Management of drowning victims includes cardiopulmonary resuscitation (CPR) and ventilation. Supplemental oxygen should be initiated as soon as possible, with intubation for patients who are apneic.

Management of cardiac arrest includes CPR to restore blood flow to the brain and application of an external defibrillator to reset the rhythm of the heart; epinephrine is often used in conjunction to maintain blood pressure. The use of glucocorticoids in cases of cardiac arrest remains controversial; studies have shown conflicting evidence regarding its effectiveness in increasing survival and neurological functioning.4,5 Recently, moderate systemic hypothermic therapy (32–34°C) for patients with anoxic brain injury from cardiac arrest has been shown to improve neurological outcomes.6

Management of ischemic stroke includes ensuring medical stability and initiating antithrombotic therapy and prophylaxis for deep vein thrombosis and pulmonary embolism. Intravenous thrombolysis with tPA has been found to improve outcomes if administered within 4.5 hours of stroke onset.7

Approximately 10% of ischemic strokes, mainly occlusion of the internal carotid artery or the MCA, can result in cerebral edema that is severe enough to increase intracranial pressure and lead to brain herniation. Nonsurgical treatment includes mannitol or hypertonic saline administration to reduce brain volume by drawing water out of the tissue. The surgical option consists of decompressive hemicraniectomy and durotomy, which relieves intracranial pressure by removal of a section of bone tissue from the skull and the underlying dura mater to allow brain tissue to herniate through the opening. Randomized, controlled studies have shown that hemicraniectomies increase survival and functional outcome in stroke patients with intracranial hypertension.8

There is currently no strong consensus on patient selection criteria for decompressive hemicraniectomy. However, infarction involving over 50% of the MCA territory is a strong predictor of malignant cerebral edema and increased intracranial pressure leading to herniation. Surgery should be considered on a case-by-case basis for stroke patients who are in otherwise good health. In a retrospective study by Suyama et al,9 presurgical midbrain compression and a GCS score = 6 were associated with decreased survival, but age was not found to be an independent risk factor for mortality and is thus not a contraindication for surgery. Furthermore, the nondominant right hemisphere is more strongly considered for surgery than the dominant left hemisphere.

The data on timing of decompressive surgery for anoxic brain injury are limited. However, there is general consensus that early surgery within 24 hours of a severe infarction, even before the appearance of herniation symptoms, is beneficial and results in better clinical outcomes.

Factors that are associated with poor outcomes in anoxic brain injury include low GCS score, lack of corneal or pupillary responses, lack of motor response, signs of early infarction on CT scan, and low ASPECTS.

Nonsurgical treatments depend on the specific cause of anoxic brain injury. The main goals of treatment consist of securing the airway, maintaining blood pressure, and monitoring intracranial pressure.

Surgical treatment consists of decompressive hemicraniectomy with durotomy and is used in cases of cerebral edema and increased intracranial pressure. Presurgical midbrain compression and a GCS score = 6 are associated with decreased survival, but age is not a contraindication to surgery. In general early surgical treatment within 24 hours of infarction is preferred, and the nondominant right hemisphere is more strongly considered for surgery than the dominant left hemisphere.

A prospective observational study of 72 patients admitted for cardiac arrest. The GCS score was significantly higher in patients with favorable neurological outcomes. The value for prediction was highest for those with GCS scores > 4. A score of > 3 on the motor component predicted a better outcome, with specificity of 100%.

A systematic review of 15 studies with a total of 3,468 patients found the prevalence of early infarction signs in patients with stroke symptoms to be 61%. The mean sensitivity and specificity for CT detection of infarction were 66% and 87%, respectively. Early infarction signs were associated with poor outcomes (OR 3.11, 95% CI 2.77–3.49).

The Alberta Stroke Programme Early CT Score (ASPECTS), a quantitative CT score, was tested on 203 consecutive patients with ischemic stroke who were treated with intravenous alteplase. Baseline ASPECTS value predicted functional outcome and the sensitivity and specificity of ASPECTS were 0.78 and 0.96, respectively. Agreement between observers measured by kappa was 0.71–0.89.

This study reported on 262 patients with cardiac arrest who received high, medium, low, or no glucocorticoids in the first 8 hours after arrest. None of the glucocorticoid groups had statistically significant improvement in survival rate or neurological recovery (as measured by a modified Glasgow Cerebral Performance Category Scale) compared to the group that did not receive steroids.

Analysis of 58,253 patients treated with tPA showed that earlier thrombolytic therapy was associated with reduced mortality, higher rates of independent ambulation at discharge, and increased discharge to home.

In this study, 93 patients with malignant infarction of the middle cerebral artery were randomized to decompressive hemicraniectomy or nonsurgical treatment in three different trials. Surgery was found to reduce mortality (absolute risk rduction) 51% and improve functional outcomes overall.

Retrospective analysis of 355 patients who underwent decompressive hemicraniectomy for malignant MCA infarction. The mean age was 67 years, and 26.1% of patients had a GCS score = 6 at the time of surgery. Mid-brain compression and GCS score = 6 were found to be risk factors for increased mortality. Age was not found to be a risk factor and suggests that surgery in the elderly may be justified due to improved outcomes.