A 20-year-old, otherwise healthy man presented to an outside hospital after a gunshot wound to the forehead. He was intubated with intravenous (IV) etomidate and succinylcholine and transported via medflight to your institution. He received 8 mg of IV vecuronium during transport. On initial examination in the emergency department, the patient is comatose, intubated, and nonresponsive to any painful stimuli. His temperature is 35.3°C, and his blood pressure is 108/67 mm Hg. His pupils are 6 mm, midposition, and nonreactive bilaterally. There are no corneal or oculocephalic reflexes. There are no rooting or sucking reflexes present. No cough is appreciated on tracheal suctioning. No gag reflex is present. Laboratory studies reveal a sodium of 164, potassium of 2.8, bicarbonate of 21, white blood cell count of 16.4, hematocrit of 45.6, platelets of 149, and an arterial pH of 7.46. His serum toxicology is negative for barbiturates, benzodiazepines, ethanol, and salicylate. A head computed tomographic (CT) scan is obtained (Fig. 137.1). 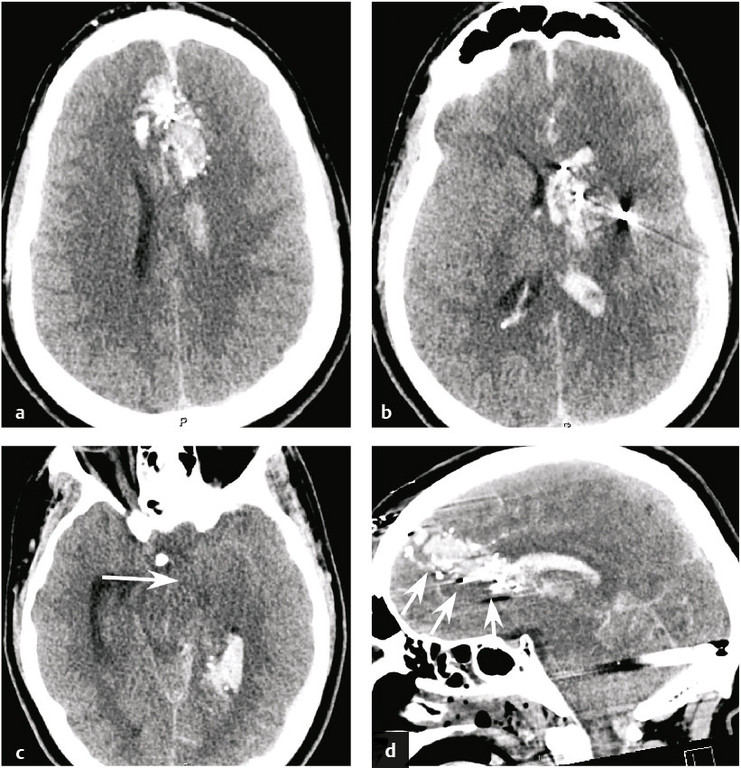 The diagnosis of brain death is a complex yet vitally important decision that many neurologists and neurosurgeons deal with on a frequent basis. In the adult population, traumatic brain injury and subarachnoid hemorrhage account for the vast majority of brain death diagnosis. In children, nonaccidental trauma, motor vehicle accidents, and asphyxia top the list for etiologies leading to a brain death diagnosis.1,2

In general, the diagnosis of brain death is made clinically. Brain death indicates the cessation of both cerebral and brainstem functions. Before one can embark on determining brain death, certain clinical criteria must be met.3–5 First and most importantly, there must be either clinical or radiological evidence of an acute catastrophic central nervous system (CNS) insult that is compatible with the diagnosis of brain death. Second, one must exclude any external drug intoxication or poisoning that may interfere with the clinical examination. Third, a thorough assessment of the patient′s systemic processes must be done to exclude any factors that may confound the clinical exam. Severe electrolyte disturbances, acid–base abnormalities, endocrinopathies, or shock may severely limit the neurological exam. Finally, the patient must not be hypothermic. The lower threshold of core body temperature to not interfere with the neurological exam has not been studied thoroughly. However, temperatures of 32 to 36°C5–9 have been used by different medical and legal bodies as the minimum core body temperature.

After successful exclusion of the confounding factors already mentioned, the examination of a patient for the determination of brain death must be precise, thorough, and accurate. First, the patient must be in a coma with absent brain-originating motor responses to pain. One must be aware that movements originating from the spinal cord or peripheral nerves may occur in brain death and occur commonly in 30 to 75% of patients.5,10–12 These movements do not constitute brain-originating motor responses that are complex or purposeful. Cranial nerve examination must demonstrate no brainstem reflexes, as listed (see box, Cranial Nerve Examination Determining Brain Death). After determination of the absence of motor and cranial nerve function, the examiner should perform the apnea test.

Prior to performing the apnea test, one must confirm that all other criteria for brain death have been met, and the patient once again may not be hypothermic, may not be hypotensive, and may not have have any intoxicating drug or any neuromuscular blockade. Disconnection of ventilator support often leads to profound hypoxemia as well as cardiac instability, so it is recommended that all patients have the fraction of inspired oxygen dialed up to 100% for 10 minutes prior to and during the test.3,5 An arterial blood gas is drawn as a baseline. The PaCo2 is documented. The ventilator is disconnected and intratracheal oxygen via a tracheal cannula is provided at 6 to 10 L/min.13 The patient is observed for standard inspiratory movements. The test is performed for 8 to 10 minutes or until one of the following criteria occurs: hypotension with systolic blood pressure below 90 mm Hg, hypoxemia (SaO2) < 85% for 30 seconds, or cardiac arrhythmia. An arterial blood gas is drawn at the immediate conclusion of the apnea test. The apnea test is considered positive if there are no observed respiratory inspirations and the PaCo2 at the conclusion of the test is > 60 mm Hg or > 20 mm Hg from the baseline value.

The required time of observation between examinations to determine brain death varies widely between institutions and states. At the initiation of brain death testing in the United States, a follow-up evaluation was required 24 hours after the first evaluation. This was then changed later on in time and made age dependent, with a 48-hour evaluation necessary for infants under 2 months, 24-hour evaluation for those between 2 months and 1 year, and 12 hours for those older than 1 year but younger than 18 years. Patients 18 years old and older are not required to have a standard observation period, although most institutions and states recommend an observation period between 6 and 24 hours.3,5

In general, a detailed neurological examination, as already detailed, is sufficient to diagnose brain death. There are, however, certain circumstances in which ancillary tests may be performed or required for the diagnosis of brain death. Most of these circumstances relate to the prerequisites of the neurological examination or apnea test. Ancillary tests are commonly used when the neurological exam or apnea test cannot be performed adequately due to either sedative or paralyzing agents or the inability to tolerate the apnea test due to hypoxia or cardiac instability. In addition, ancillary tests may be used when multiple organ system failure obscures the examiner to know whether sedative or paralytic drugs have cleared. Furthermore, ancillary tests are often required for young infants and are required by law for patients < 1 year old.5,14 One should always remember that all ancillary tests have advantages as well as limitations. Knowledge of the test that one is using is imperative in good clinical decision making. A brief discussion of each of the ancillary tests is provided here.

Four-vessel angiography is regarded as the gold standard for ancillary testing of brain death.15 Testing demonstrates absent blood flow within the intracranial compartment, specifically in the circle of Willis. The external carotid arteries should have appropriate flow.

Absence of arterial blood flow on magnetic resonance angiography (MRA) is a noninvasive method supporting the diagnosis of brain death. MRA can also be used to show other abnormalities within the brain, such as mass lesions, stroke, herniation, and brainstem hemorrhage. This study, however, requires patients to lie flat in a minimally monitored setting and can lead to hemodynamic instability. A few studies have showed high sensitivity but varied specificity in the diagnosis of brain death; therefore, this test should be used with caution and in conjunction with other testing modalities.16–18

In the first guideline publications on brain death diagnosis, a flat EEG was required, and this finding continues to be an essential part of the diagnosis of brain death in very young children. Recently, EEG has become an ancillary test for adults to be used when clinical criteria are not met. EEG silence is defined as no nonartifactual electrical potential > 2 µV during a 30-minute recording session at an increased sensitivity of 2 µV/mm.21 One should be aware that recordings of an EEG consist of cerebral neocortex, and potentials from subcortical structures, such as the brainstem, are not recorded. EEG is also heavily affected by sedation, medication poisoning, hypothermia, and other metabolic factors. One should use this test in the setting of expert consultation and with caution given the multiple confounders that exist.

Insonation of the intracranial arteries with findings of small systolic peaks without diastolic flow suggests high vascular resistance and aids in the diagnosis of brain death. It should, however, be used with caution given its use is very dependent on user expertise and carries a rather low sensitivity and specificity in multiple studies.22,23

There are multiple conditions that can mimic brain death if a patient is not carefully evaluated. These should be carefully considered when making the diagnosis. A thorough history of the time course as well as the precipitating events leading to the patient′s condition will usually aid in eliminating the erroneous diagnosis of brain death. The following syndromes have been found to mimic brain death: locked-in syndrome, Guillain–Barré syndrome, hypothermia, neuromuscular paralysis either due to acute polyneuropathies or due to iatrogenic neuro-muscular blocking agents, other sedative drug intoxications, and metabolic encephalopathies.

Brain death determination is an important diagnosis that is often delegated to many neurologists and neurosurgeons. The diagnosis of brain death is usually made clinically and includes: clinical or radiographic evidence of an acute catastrophic event to the CNS compatible with the diagnosis of brain death; exclusion of external drug intoxication or poisoning; exclusion of systemic abnormalities, such as severe electrolyte or acid–base disturbances, shock, hypothermia, or endocrinopathies; a neurological exam with absent brain-originating motor responses to pain; a cranial nerve examination with absent brainstem reflexes; a positive apnea test; an observation period and repeat examination; and ancillary tests if needed.

One should be aware that there are multiple conditions that mimic brain death. A detailed history, physical examination, and understanding of the time course as well as precipitating events leading to the CNS insult will aid in eliminating erroneous diagnoses.

A review of how to determine brain death.

An updated review of how to determine brain death.

American Academy of Neurology guidelines for determining brain death (not most current).

A case report of a 10-month-old boy who clinically was diagnosed as being brain dead but started having spontaneous breathing 15 hours after presentation. The authors suggest that brain death diagnosis may need revision in infants.

Editorial on whether brain death findings are reversible.

An editorial response to a case report on brain death. It discusses the ideal body temperature for the determination of brain death.

This study reports on sequential brief plantar flexion of the toes and reports on the frequency of this occurring in brain dead patients; 23% had undulating toe movements in a patient population of 107.

This study compared three methods of apnea testing for the confirmation of brain death in 10 adult patients. They found that the T-piece system was the most effective at completing the apnea test.

This study surveyed brain death criteria in 80 countries as well as organ transplantation guidelines. The author concludes that there is uniform agreement on the neurological examination with exception of the apnea test. There was no standardized guideline worldwide.

Four patients with clinically determined brain death had MRI/MRA. The authors report that no patient had flow above the supraclinoid internal carotid artery. They conclude that this is a viable way to diagnose brain death.

Fifteen patients with clinically diagnosed brain death were examined with MRI/MRA. In 9 of these patients, traditional diagnostic cerebral angiography was also performed. The authors report that MRI can achieve noninvasive diagnosis of brain death.

CTA was studied in 21 patients who were clinically diagnosed with brain death. Arterial perfusion was found in 10/21 patients. Cerebral vein opacification was achieved in only 30%. The authors report that CTA should not be used for brain death diagnosis.

Most current guidelines for performing EEG to determine brain death.

This study assessed the utility of transcranial Doppler in the diagnosis of brain death. Fifty-seven patients who were clinically declared brain dead had transcranial Doppler performed. The authors found that, when using the transorbital approach rather than the transtemporal or transforaminal approach, positive findings with definitive diagnoses of brain death rose from 79 to 88%.