A Case: Syringomyelia and Tethered Cord

Key Steps of the Procedure

For lobar ICH, a horseshoe skin flap is typically used. The craniotomy should be large enough (at least 6–7 cm) to allow relaxation of swollen brain (Fig. 87.2 A). Dural incision is cruciate (X- or H-shaped) or curvilinear. For very extensive hematomas, a large trauma flap may be performed, particularly if concomitant decompressive hemicraniectomy is being considered. 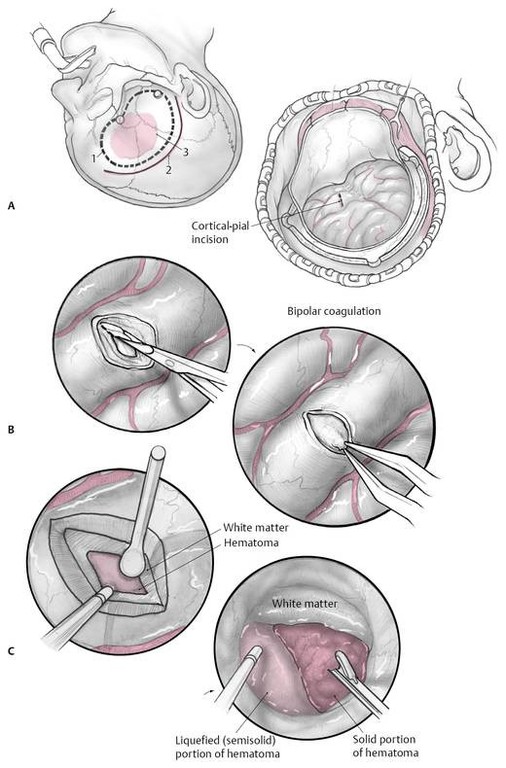 For basal ganglia ICH, a classical pterional skin incision and craniotomy with a curvilinear dural incision are typically used. These are followed by dissection of the sylvian fissure and exposure of the insular cortex using the operative microscope (transsylvian–transinsular approach).

For cerebellar hematomas, a midline or paramedian linear skin incision is often performed. Alternatively, a hockey-stick incision extending from the midline to the ipsilateral pinna may be used. A large suboccipital craniectomy is usually performed with exposure of the transverse and sigmoid sinuses and opening of the foramen magnum, followed by a cruciate dural incision.

Once the cortex overlying the hematoma is exposed, a small 1–2 cm pial-cortical incision is made using bipolar cautery and microscissors under microscope or loupe magnification (Fig. 87.2 B). The subcortical white matter is then progressively dissected using a Penfield #1 dissector until the hematoma cavity is entered (Fig. 87.2 C). Gentle retraction of the white matter is maintained by an assistant holding the dissector or by a self-retaining retractor (e.g., Greenberg retractor), and the hematoma is evacuated using a fine suction with intermittent irrigation by the assistant. Solid portions of the hematoma may be removed using a pituitary rongeur or tumor forceps (Fig. 87.2 C). Suctioning is continued until white matter is encountered in all planes. Injury to this potentially salvageable tissue should be avoided at all costs. Frequent changes in the orientation and position of the retractor will help expose more clot and achieve better hematoma evacuation. Meticulous hemostasis is obtained using bipolar cautery and application of local hemostatic agents (e.g., polyanhydroglucuronic acid oxidized cellulose polymer, SurgicelTM, Johnson & Johnson Inc., New Brunswick, NJ; microfibrillar collagen, AviteneTM, Davol Inc., Warwick, RI; or bovine-derived gelatin matrix component, FlosealTM, Baxter, Deerfield, IL). It may help to ask the anesthesiologist to raise the SBP moderately and watch for active bleeding in the hematoma cavity prior to dural closure.

In supratentorial craniotomies, decisions should be made whether to replace the bone flap and whether to insert an ICP monitor. The degree of intraoperative and anticipated postoperative cerebral edema should be taken into account when making such decisions.