A Case: Syringomyelia and Tethered Cord

A 64-year-old man presented with acute-onset severe headache. He took two aspirin for relief, progressively developed left hemiplegia, and called 911. En route to the hospital, his blood pressure was noted to be 213/105 and he became progressively stuporous. Upon arrival at the hospital, a “code stroke” was called, and the patient underwent immediate computed tomography, which showed a left frontoparietal lobar intracerebral hemorrhage without intraventricular hemorrhage measuring 34 mL in volume (Fig. 37.1). At the time of evaluation, the patient did not open his eyes to painful stimulus, made incomprehensible sounds, and withdrew to pain only on the right side. After transfusion of platelets, the patient was taken to the operating room for surgical evacuation and decompression. Postoperatively, the patient was awake and alert, following commands on the left side but with an expressive aphasia and right-sided hemiparesis. 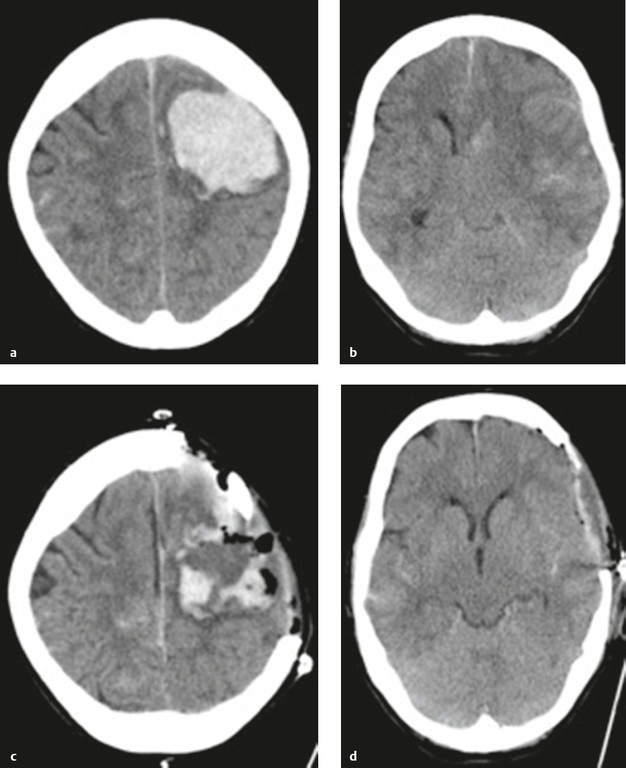 Spontaneous supratentorial intracerebral hemorrhage (ICH) is hypothesized to be caused by the rupture of small arteries. The term spontaneous is meant to specify ICH in the absence of trauma (the most common cause), hemorrhagic neoplasms, hemorrhagic conversion of an ischemic stroke, venous sinus thrombosis–related hemorrhage, and vascular malformations. Spontaneous ICH most frequently occurs at the bifurcation of unbranched, perforating arterioles. Studies have shown that these proximal segments undergo a higher rate of microatheroma development and lipohyalinosis, ultimately causing spontaneous rupture. The incidence of cerebral amyloid angiopathy significantly increases with age. With an aging population, more spontaneous ICH will likely be attributable to amyloid angiopathy.1 Higher rates of spontaneous ICH are seen in men, patients of African or Japanese descent, recent heavy use of ethanol or sympathomimetics, and low serum cholesterol levels.

The hemorrhage typically dissects planes between bundles of white matter, which is important to keep in mind when discussing treatment options because there is frequently viable neuronal tissue intermixed with and surrounding the hematoma. Multiple studies have shown that the hematoma continues to expand after the initial event. In some patients, hematoma growth continues over 24 hours after the initial event. Due to the underlying vascular pathology, spontaneous ICH most commonly occurs in a well-known set of locations. In decreasing frequency, ICH is seen in the putamen (35%), cortex and subcortical white matter (25%), thalamus (20%), cerebellum (5%), and brainstem (5%).

The most important risk factor for development of ICH is patient age. However, the most important modifiable risk factor is hypertension. Patients with a systolic blood pressure over 160 mm Hg or diastolic blood pressure over 110 mm Hg have a 5.5 times higher rate of ICH.2 Initiation of antihypertensive therapy is associated with a significant decrease in the incidence of ICH.3

Patients with ICH frequently have acutely elevated blood pressure due to increased intracranial pressure. Elevated blood pressure has been shown to increase hematoma volume and to worsen outcomes following spontaneous ICH.4 The Intensive Blood Pressure Reduction in Acute Cerebral Haemorrhage Trial (INTERACT) study5 suggested that high blood pressure leads to increased hematoma volume but without a change in functional outcome. Anti-hypertensive Treatment of Acute Cerebral Hemorrhage (ATACH I)6 was a pilot study that showed no significant adverse events with three different blood pressure goals. Follow-up randomized, controlled trials (INTERACT27 and ATACH II8) are both currently under way to determine if tighter management of blood pressure parameters leads to a difference in patient outcomes.

Anticoagulant medications have been shown to be an independent predictor of the incidence of ICH, increased hematoma expansion, and worsened outcome following ICH. Management of anticoagulation-associated hemorrhages requires the additional steps of discontinuing the offending agent and reversal of the patient′s coagulopathy. Fresh frozen plasma (FFP) has traditionally been used for reversal; however, it is deficient in factor IX, requires a significant volume of fluid administration, and frequently delays the reversal of coagulopathy. Recombinant factor VIIa was studied for ICH and it reduced hematoma volume but did not have an improvement in patient outcomes.9 Notably, it is an activated clotting factor and therefore has a significant risk of thrombosis. Preliminary data suggest that prothrombin complex concentrate (PCC) is superior to FFP in rapid reversal of warfarin-induced coagulopathy.10 There is currently a prospective, randomized trial to confirm these results.11

Antiplatelet agents have also been shown to increase the incidence, mortality, and volume of ICH.12 Not surprisingly, the combination of aspirin with clopidogrel leads to a synergistic increase in ICH volume. The data regarding reversal of antiplatelet agents via platelet transfusion show limited efficacy. However, there is currently a randomized trial under way to assess the utility of platelet transfusion in ICH.13

The morbidity and mortality of spontaneous ICH continue to be high. Only 20% of patients are functionally independent at 3 months,14 and the reported 30-day mortality is roughly 40%. The presence of intraventricular hemorrhage (IVH) carries a significant additional burden of morbidity and decreases the chance of a favorable outcome by 50%.15 Worsened outcome is also predicted by larger initial hematoma volume and nonlobar location.

There are two main theoretical goals of surgical intervention in spontaneous ICH. The first is reduction of mass effect and associated elevated intracranial pressure. The second is salvage of the penumbra surrounding the hemorrhage through improved perfusion and removal of neurotoxic substances. Prior to recent randomized, controlled trials, the literature consisted of conflicting studies. In 2005, the International Surgical Trial in Intracerebral Hemorrhage (STICH) trial was published.16,17 This prospective, randomized, controlled trial showed no difference in Glasgow Outcome Score between patients undergoing early surgery (within 24 hours of randomization) compared with maximal medical therapy. This study has several known limitations. Subgroup analysis suggested a possible benefit in patients with a hematoma < 1 cm from the cortical surface. The follow-up trial (STICH II)12 therefore examined patients with a superficial lobar hemorrhage. This trial showed no difference in outcome between surgical and nonsurgical groups.

Surgical options for ICH include traditional craniotomy and minimally invasive hematoma evacuation with or without thrombolysis. In the STICH trials, investigators were free to choose their surgical technique. A randomized, controlled trial18 showed an improvement in functional outcomes in patients with basal ganglia hemorrhages treated with needle aspiration and urokinase instillation. Stereotactic recombinant tissue plasminogen activator (rtPA) has also been shown to decrease hematoma volume. Randomized, controlled trials are under way to confirm these preliminary data. The third phase of the Minimally Invasive Surgery plus rtPA for ICH Evacuation (MISTIE III) study is under way. Additionally, a collaborate effort with the Intraoperative CT-guided Endoscopic Surgery for ICH (ICES) group has completed enrollment for MISTIE-ICES, comparing minimally invasive hematoma aspiration with low-dose rtPA administration.

Spontaneous supratentorial ICH is a common neuro-surgical problem that unfortunately has significant morbidity and mortality. Surgical treatment has had mixed outcomes in large series. Key steps in management consist of reversal of any coagulopathies, treatment of high blood pressure, and consideration of surgical intervention. Surgical options include hematoma evacuation by craniotomy, endoscope, or stereotactic needle drainage with or without local administration of thrombolytics.

A large number of patients (n = 10,940) were randomized to either usual care or stepwise addition of antihypertensive agents until normotension was achieved. In this large group with long-term follow-up, control of blood pressure significantly reduced the incidence of both ischemic and hemorrhagic strokes.

Design and protocol for the INCH trial: a prospective, randomized, controlled trial comparing FFP and PCC in the setting of ICH secondary to a vitamin K antagonist. Notably, this study includes both ICH and subdural hematomas. The primary outcome is reversal of INR to < 1.2 within 3 hours.

Prospective functional and survival data were collected for patients with spontaneous ICH. At 6 months, they reported a 43% mortality, with 42% having a satisfactory outcome and 16% having a poor functional outcome.

INTERACT-2: A randomized, controlled trial (n = 2,839) of blood pressure control with spontaneous ICH and hypertension on admission. Patients were randomized to intensive (SBP < 140 mm Hg) or the previous guideline (SBP < 180 mm Hg). There was no difference in mortality; however, there was a significant decrease in modified Rankin Scale scores in the intensive control group.

In vitro analysis of 3-factor and 4-factor formulations of PCC as well as FFP. Four-factor PCCs were equally effective at an INR of 3 but not at extremely elevated INR. FFP was less efficacious at recovering thrombin generation and factor 2 levels. The time to thrombus formation was not shortened with FFP but was shortened by PCC, suggesting inferiority of FFP to PCC.

Meta-analysis of five randomized, controlled trials using factor VII for spontaneous ICH. Factor VII decreased hematoma growth, but there was no difference in mortality or functional outcome. Notably, there was a significant increased risk of arterial and venous thromboembolic events.

For all patients with spontaneous ICH, the authors measured platelet activity (VerifyNow, Accumetrics, Inc., San Diego, CA) at admission to compare with patient outcomes. Their findings were multiple: 24% of patients without a known history of aspirin consumption had impaired platelet activity, reduced platelet function was significantly associated with worsened outcome at 3 months, and patients who received a platelet transfusion showed no difference in outcome.

Methodology and rationale behind the creation of ATACH II: a randomized, controlled trial comparing reduction of SBP < 140 mm Hg with nicardipine at < 3 hours following onset, compared with a control group of SBP < 180 mm Hg.

Subgroup analysis of STICH I suggested an improved outcome with surgical evacuation of superficial, lobar hematomas in patients without the presence of IVH. STICH II consisted of these patients, randomized to medical therapy (n = 294) or surgical therapy (n = 307) within 12 hours of onset. There was no evidence of improved mortality or functional outcome with surgical evacuation.

Outline of the methodology of a current randomized, controlled trial of platelet transfusion for patients with spontaneous ICH in the presence of antiplatelet agents.

Using a pooled data set of patients from the Atherosclerosis Risk in Communities (ARIC) and Cardiovascular Health Study (CHS), over 260,000 person-years of follow-up produced a guide regarding risk factors for ICH. As seen elsewhere, an inverse relationship between ICH incidence and low-density lipoprotein levels was seen. Direct associations were also seen with age, African American ethnicity, and hypertension.

This subgroup of analysis from the STICH data showed that either intraventricular hemorrhage or hydrocephalus was associated with a significantly poorer outcome following spontaneous ICH. Fifteen percent of patients with ICH and IVH had a favorable outcome, compared to 31% of patients without IVH. The presence of hydrocephalus worsened this proportion to just 11.5%.

Review article that describes the management of amyloid angiopathy–associated ICH from a surgical perspective.

The STICH trial was a randomized, controlled trial of early surgery (defined as within 24 h) compared with maximal medical treatment. It showed no difference in outcome with surgery were with some important limitations. The most notable of these limitations was the median time to surgery (30 h) and the fact that 26% of control subjects crossed over to surgery.

Randomized, controlled trial (n = 465) of treatments forwhoICH involving the basal ganglia. Patients randomized to surgery had stereotactic needle drainage followed by urokinase administration. There was no significant difference in mortality; however, there was an improvement in the proportion of patients who had a good functional outcome.